The Royal Welsh Fusiliers were a poetic bunch. Among their number, they could count both Siegfried Sassoon and Robert Graves, whose poetry shattered the jingoistic messages of 1914 and exposed the truth of war in all its grim horror. Neither escaped unscathed.

Siegfried Sassoon had enlisted in the army even before the outbreak of war. He joined the Sussex Yeomanry, but broke his arm so badly in a riding accident that he spent most of 1915 convalescing and only arrived in France in November of that year, as a Second Lieutenant in the 1st Battalion of the Royal Welsh Fusiliers (who would later become the Royal Welch Fusiliers). A few days later Robert Graves arrived. He had been with the 3rd Battalion since enlisting with the Fusiliers just after the outbreak of war.

With poetry in common, the two men became close friends.

Graves published his first volume of poetry, Over the Brazier, in 1916, but almost didn’t live long enough to see it in print. At the battle of the Somme, he took a shell splinter through the lung and was so badly wounded that he wasn’t expected to survive and was even listed in the official reports as having died of his wounds. There’s a letter in the Imperial War Museum’s collections from the poet and author John Drinkwater to Graves’ father, offering his congratulations for finding out his son’s reported death was not in fact true. His recovery was long and arduous, and although he did go back to France for a brief spell, most of the rest of his war was spent in England.

Sassoon’s poetry, meanwhile, grew darker and darker. He opened up the dark underbelly of the war, writing of rotting corpses, horrific injuries and men driven to suicide by the horror of what they endured. Paradoxically, he himself was a great favourite with the men under his command, and proved himself an extremely able and daring company commander. In July, 1916, he was awarded the Military Cross. Later he was recommended for the Victoria Cross (although it was never awarded). 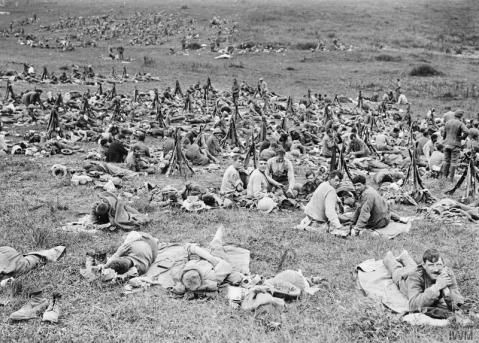 Image © IWM (Q 723) – Troops of the Royal Welsh Fusiliers at rest after being relieved from the trenches; near Acheux, 28th June 1916.

Graves described Sassoon’s bravery as ‘suicidal’, and it does seem that as Sassoon’s despair at the horrors he witnessed increased, he drove himself to ever greater levels of self-sacrifice. In 1917, after a spell in hospital in England, he decided to make a stand. In Finished with the War: A Soldier’s Declaration – a letter to his commanding officer, which was also published in newspapers and read out in parliament – he refused to return to duty. Some saw his stance as treasonous, but his sympathisers, Graves among them, helped ensure that instead of a court martial, he was officially diagnosed as suffering from shell shock.

He eventually returned to the Western Front, and was even promoted, but in July 1918 he was badly wounded, shot in the head by fellow British soldiers, who had mistaken him for a German. His war was over.

Although both Graves and Sassoon carried the physical scars of their time in the trenches their whole lives, perhaps the more enduring legacy was the effect it had on their work. It’s through that that so many others have been able to get a glimpse of the horrors they lived through and survived, but which claimed so many of their contemporaries.

Tagging of the diary of the 1st Royal Welsh Fusiliers is still at an early stage. Why not join us at Operation War Diary and follow the journey of these two remarkable men?