On the 26th of April, 1915, the 15th Ludhiana Sikhs were assembling ready to move up into the Ypres Salient. Shortly after they moved off, the march was halted due to enemy shelling. All non-essential transport was left behind and the Sikhs continued onward by companies, leaving a three minute gap between each. Around them was absolute chaos – heavy traffic in both directions, transports full of wounded, groups of refugees, other bodies of infantry. They pressed on.

‘The spires and towers of Ypres soon came in sight and simultaneously the whistling and screaming of shells followed by loud explosions as they fell into the unhappy town.’

Imagine the sight – endless salvos of shells slamming into this ancient and beautiful town, history being undone right before their eyes.

The Sikhs left the main road then, passing north of the town, where comparatively few shells were falling. The diary author notes that it was still sufficiently unpleasant to keep them from dawdling on the way.

It was here they came under fire from 42cm shells for the first time. Probably fired from a Big Bertha howitzer (a super-heavy mortar) these enormous shells tore through the air with a noise…

‘…best compared to that of an express train’.

Enormous columns of debris and smoke were thrown 300ft into the air. You can almost sense the diary author’s awestruck horror and, just for a second, imagine the hellish noise and destruction they must have been marching through. Have a look for yourself; the links to the diary pages are below: 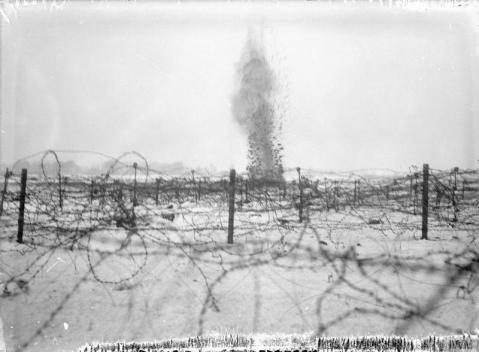 Image © IWM (Q 1688) – A shell bursting amongst the barbed wire entanglements on the battlefield at Beaumont Hamel, December 1916.

This episode is just one of many where the dry, official tone supposed to be adopted by diary authors gives way to something much more personal. It’s difficult for us to imagine exactly the things these men experienced, but as their personalities and feelings start to find their way into their words, it’s possible to feel a connection to a human being, rather than an historical account. One hundred years might separate us from them, but it no longer seems like quite such a long time. Josie Pegg, the Citizen Historian who first came across this account finds it…

‘…very moving to read accounts that reveal poignant details and the emotions of the men involved. I originally started tagging the diaries as an interest when I retired and was lucky to be able to start with the 11th Leicester Pioneer battalion as my Great Grandfather served with them. The many small incidents and asides that are mentioned in most of the diaries have been fascinating. It has also become apparent that life for the average soldier was mostly mud, boredom and waiting around, interspersed with moments of horror.’

Why not join Josie and the rest of our Citizen Historians in preserving these links to the men who chronicled the First World War? With your help, their legacy will live on for many generations to come. Get involved at Operation War Diary.