As well as the tagged data generated by Operation War Diary’s Citizen Historians, the opportunity exists to classify a wide range of contextual information by recording hashtags on each diary’s talk pages. There have already been lively discussions amongst Citizen Historians over how best to hashtag #horses and #aeroplanes along with a concerted effort by many to do so. Just go to the Operation War Diary Talk forums over at http://talk.operationwardiary.org/ and search for either term to see the results.

In this blog post, Professor Edgar Jones discusses common medical terms which you might encounter, and which can be noted by using the #shellshock hashtag. Edgar is Professor of the History of Medicine and Psychiatry at King’s College London and leads the MSc in War and Psychiatry. He sits on Operation War Diary’s academic advisory group.

The most common psychological diagnosis of the First World War was shell shock. The term was used by servicemen themselves in the winter of 1914-15 but given formal medical authority by Captain C.S. Myers in a Lancet paper published in February 1915. Henceforth, it was used in medical notes. It was a catch-all term without a precise definition and included a wide range of psycho-somatic presentations (a mixture of functional physical and psychological symptoms). It is not the same as PTSD though has some symptoms in common. However, the military medical authorities were concerned about its use and from 1917 onwards tried to restrict the use of the term. Alternative diagnoses included: neurasthenia and war neurosis.

Please note: contemporaries wrote shell shock as one or two words. When tagging the term it is important to record it as a single word, #shellshock. 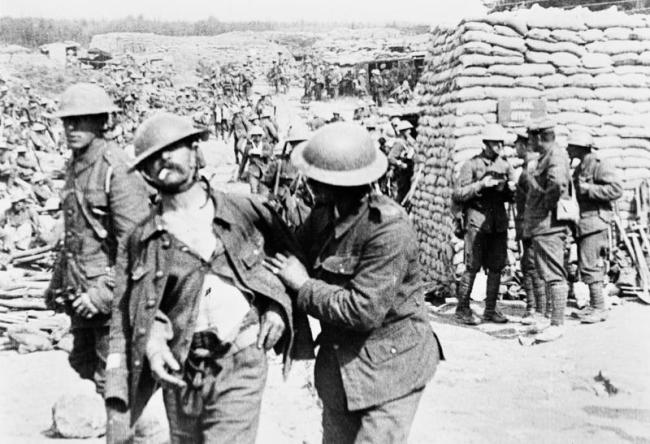 Other labels used to describe psycho-somatic disorders in the British Army included:

Disordered action of the heart (DAH): This was a functional disorder (ie without organic basis) characterised by palpitations, chest pain, shortness of breath, fatigue and difficulty completing tasks. It was prevalent in the British Army throughout the latter part of the nineteenth century and was also known as irritable heart, soldier’s heart, cardiac neurosis and Da Costa’s syndrome.

Neurocirculatory asthenia: The term introduced by US military physicians serving in the UK and France in 1918 to avoid use of the terms disordered action of the heart or effort syndrome.

Gas hysteria was a term applied to servicemen who believed that they had been exposed to gas but for which there was no organic evidence and also to those who had a mild exposure, had recovered physically but continued to report medically-unexplained symptoms.

If you come across any of these terms while tagging the diaries, we would be very grateful if you could use the hashtag #shellshock to note them in the comments section for the relevant diary page. You could be helping to advance our understanding of the psychological effects of the war on the soldiers who fought in it!