Let’s Remember Together – Three Life Stories from the War Diaries

Today’s post is the third and final in our Let’s Remember Together series. Three days, three names chosen at random from the diary pages, the beginnings of three Life Stories. Today, I’ve been researching Private A. Morrall, mentioned in the diary of the 1st Battalion King’s Shropshire Light Infantry. You can see the diary entry by clicking here.

Image © IWM (Q 1684) – Officers inspecting chunks of ice broken up by shell fire on the battlefield at Beaumont Hamel, December 1916.

Private Morrall is included in a list of NCOs and men recommended for the Military Medal for gallantry. His service number is 8196. Further research on Lives of the First World War tells us he was Alfred Edward, a career soldier. He enlisted in the Army on the 30th of August, 1906. The 1st Battalion of the King’s Shropshire Light Infantry deployed to France at the outbreak of hostilities in 1914 and remained on the Western Front all the way through the conflict, making Private Morrall one of the ‘Old Contemptibles’ of the British Expeditionary Force, apparently derided by the Kaiser. He was discharged on the 28th of May, 1917 because of illness.

Beyond that, details are sparse. Why not have a look at his Life Story and see if you can add to it?

I hope this series has shown how Operation War Diary and Lives of the First World War can be used together to breathe life back into the names we uncover on the diary pages. We hope eventually to feed the data generated by Operation War Diary into Lives, to allow evidence from the diary pages to be attached directly to Life Story pages. I’m looking forward to building up a more detailed picture of the names I’ve encountered over the last few months – Captain Swaine, who thought his Cyclist Company might have fired the first shot on the Western Front, Sergeant Lowe, who led a party of the Durham Light Infantry into enemy trenches and Rifleman Bajbir Rana, of the 1/1st Battalion Gurkha Rifles, who volunteered to go out into no-man’s land on the 16th of February, 1915, to scout enemy positions.

I can’t pretend that doing this work makes me any more capable of understanding the hardships and horrors they must have endured, but I feel it’s valuable nonetheless. In tagging their names, our Citizen Historians are ensuring that they do not become lost in the pages of history. In building up details around them, we can see them as real people once again, people just like us, who because of time and situation were thrown into a conflict that devastated a generation. So many of them were lost on the journey through, and yet in some small way we can now make sure that loss is not forgotten.

Ninety-six years ago today, the guns had fallen silent on the Western Front. The first full day of peace had begun. I can only imagine the relief of the men who survived to witness it, and yesterday we came together to remember the tragic loss of those who did not.

Thankfully, the name I picked to research today belongs to the former group – Regimental Sergeant Major T.V. Roberts, mentioned on the 31st of October, 1915 on this page of the 2nd Battalion, South Lancashire Regiment’s diary.

Number 4918 RSM Talbot Vivian W. Roberts was born in 1881 in Warrington. The 1891 census lists him as still being there, age 10. He appears in the return for Orford Barracks, where he lived with his father, a Paymaster Sergeant with the Infantry, his mother, three younger brothers and three younger sisters.

He doesn’t appear in any other census returns, but we know the 2nd Battalion of the South Lancashires served overseas from 1881 until the outbreak of the First World War. Given his rank, we might assume he enlisted with them at some point after the 1891 census and so was stationed outside of the UK when the censuses were carried out.

Sadly, like so many others, his Army service record has been lost. However, from his Medal Index Cards (he has two), we can see he was Mentioned in Despatches, although not when or why. We also see that he transferred from the South Lancashires at some point into the Labour Corps, where he retained his rank, but was assigned a new service number, 314641. There is no record of why this happened, but the Labour Corps was manned by men who had been medically rated below the ‘A1′ condition needed for front line service. Many of them had been wounded and returned to duty – I wonder whether this has anything to do with RSM Roberts’ Mention in Despatches.

Beyond that, details are sparse. We know he survived the war and died in 1940, aged 59, in Winchester.

Take a look at his Life Story – perhaps you can add to it. Join us on the blog tomorrow, when we’ll post the next installment of our Let’s Remember Together series. In the meantime, let us know if you’re researching names from the diaries too – we’d love to help ensure the legacies of the men mentioned in their pages are preserved.

Today is Remembrance Day in the UK, although for those of us tagging the war diaries, I think every day is one of Remembrance. That’s one of the most important things about the project – it’s far more than a data-generation exercise. Every time we read somebody’s name, we connect with the life they lived 100 years ago, even if only with a brief snapshot of it. What better way to remember them and their actions?

If you’re anything like me, you can’t help but wonder, though…what became of them, where did they come from? Lives of the First World War, IWM’s permanent digital memorial, allows us to begin building up details around those brief snippets we uncover in the diary pages.

As part of the Let’s Remember Together campaign, I picked three names from random diary pages and went searching through the records to see what details I could uncover. Happily, all the names I chose survived the war, although so many countless others did not. 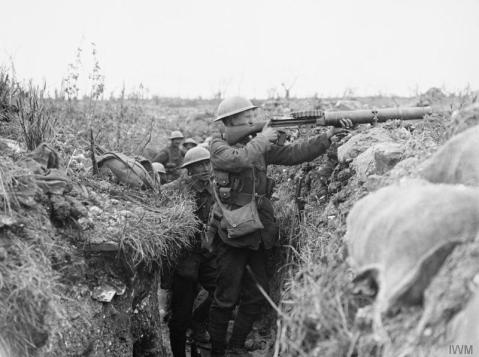 Image © IWM (Q 3987) – A Lewis light machine gun in action in a front line trench near Ovillers. Possibly troops of the Worcestershire Regiment of the 48th Division.

The first name I found was Second Lieutenant H.B. Lomas, mentioned here in the diary of the 11th Battalion, the Cheshire Regiment as a Lewis Gun Officer. Searching through the record sets available in Lives of the First World War, I was able to discover that he was Harold Baldwin, and that he later became a Captain in a Tank Battalion. Perhaps this was because of his background as a machine gun officer. The Tank Corps started out life as the Heavy Section of the Machine Gun Corps.

Census records show the was born in 1890 in Toxteth Park, then in Lancashire. His father, Joseph, was a geology teacher. By 1901, the family had moved to Birkenhead, where Harold’s mother, Sylvia, had given birth to Olga, his sister. Things seemed to have been reasonably comfortable for them – there is a servant listed on the census return.

The 1911 census shows the family at the same address in Birkenhead. Harold’s mother is now listed as a widow. Harold is 20. He works as an apprentice engineer in the shipyards. Sadly, his military service record no longer survives, so we can only guess at his enlistment date.

He made it home from the war and died in Rugby, in 1947. Can you add to his Life Story on Lives of the First World War?

I’ll post about the other names I researched over the next couple of days. In the meantime, join us for two minute’s silence at 11am and let’s remember together the names of the war diaries.